Most of us will go through our lives experiencing our fair share of lucky breaks and moments of misfortune. We often put these encounters down to random chance, but have you ever wondered if luck might actually have something to do with where you live? We thought so, too.

Comparing each state across 10 different factors*, including overall happiness, number of reported disasters and divorce rates, we’ve been able to assign each a weighted score out of 100 to reveal once and for all the least and most lucky areas of America. Read on to check out where your state ranks.

The Five Unluckiest States in America 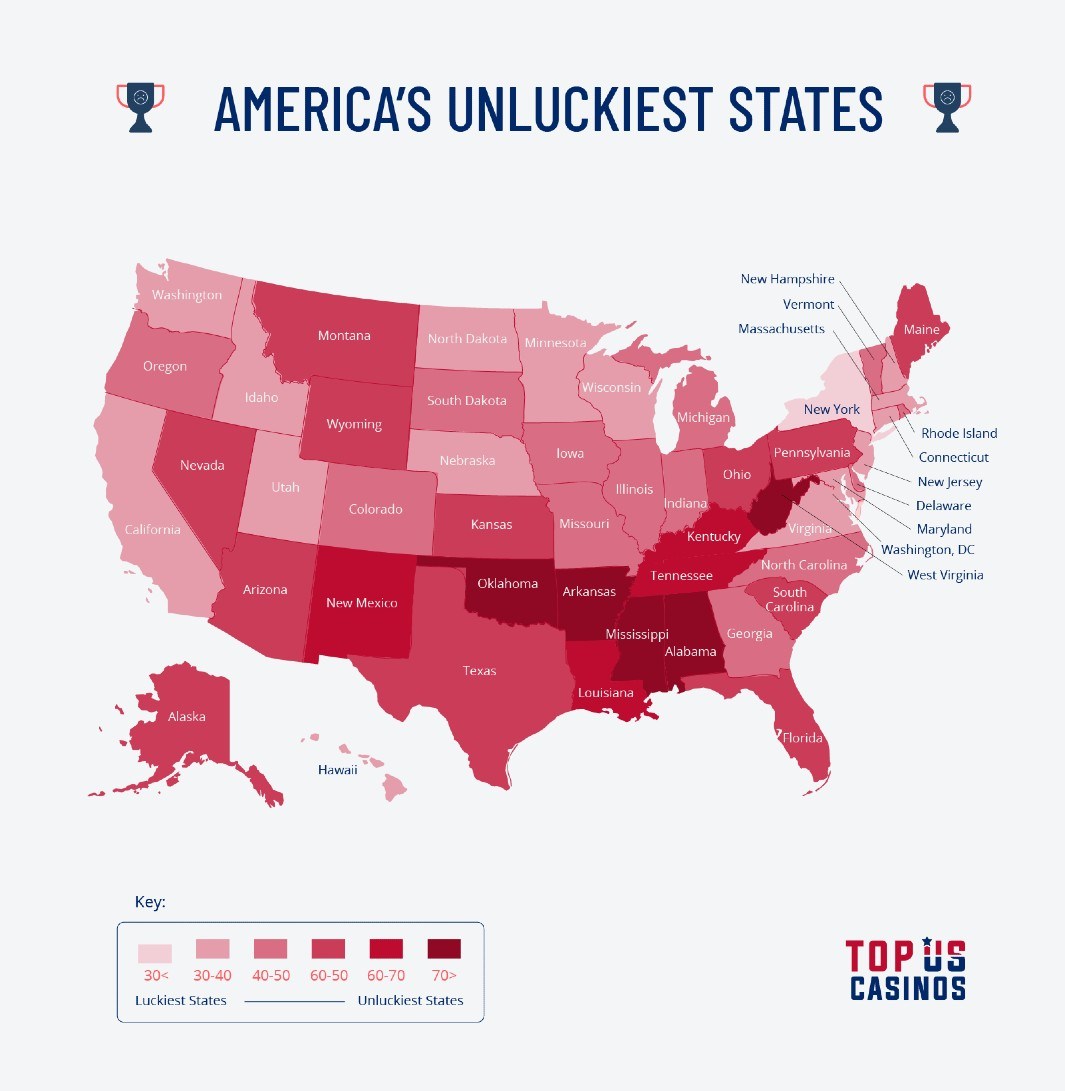 With an astonishing index score of 75.08, West Virginia is unfortunately named American’s unluckiest state. It ranks bottom of the pile for happiness, as well as having the highest accident mortality rate (92.6 people per 100,000) and lowest life expectancy of all states (74.8 years).

Next up, Mississippi comes away with an index score of 71.57, making it the second-least lucky state. Specifically, the southern state ranks just below West Virginia for life expectancy (74.9 years) and among the bottom five states for overall happiness (47th).

Meanwhile, neighboring Arkansas also earns an unwanted place among the unluckiest states, with an index score of 71.25 — only marginally below Mississippi. Taking a look at some of the reasons why, the state ranks 49th for overall happiness, and there’s no state with more divorced couples under 30 (19.5%).

Staying in the south, we cross the state line into Oklahoma (70.91), which ranks as the fourth unluckiest of the lot. Diving into the detail, Oklahoma has the third highest rate of divorces in couples under 30 (17.2%), the fifth lowest happiness rating according to residents, and places among the top 10 for accident mortality rate per 100,000 (61.4).

Rounding out the top five unluckiest American states, we have Alabama, our fourth southern state — incidentally, nearby Louisiana, Kentucky, and Tennessee each also place among the top 10. Alabama places 43rd for overall happiness according to the people who live there, has the third lowest life expectancy of all states (75.5 years old), registers the fourth lowest personal per capita income ($46,479) and has the fourth highest divorce rate for couples under 30 (15.5%).

The Five Luckiest States in America

We’ve had a look at the least lucky states, but how about those most blessed with favor and fortune?

Taking top spot with an impressively low unluckiness score of just 28.26, New York claims the title of most fortuitous state. The region earns the number one position thanks to factors such as its low accident mortality rate (just 34 people per 100,000), high proportion of Mega Millions winners over the last 20 years (39) and respectable rate of divorces in couples under 30 (5%).

Next up, we head to Minnesota (30.32), with the Midwestern state ranking as the second luckiest overall. Among other factors, Minnesota is named the second-best state to live, considering infrastructure, education, and safety, and the people there are the second happiest overall.

Trailing closely, California is the fourth luckiest state in America, with an index score of just 32.56. The West Coast’s Golden State places only behind New York for accidental mortalities (34.1 per 100,000), has the second highest life expectancy (81.7 years old) — behind only Hawaii (82.3 years old) — and boasts the fifth highest personal per capita income ($70,192).

Finally, New Jersey (32.91) rounds out the five luckiest states. Like its neighbor across the Hudson River, New Jersey has a low rate of divorces in young couples (just 5.3%) and a high proportion of Mega Millions winners since 2002 (22) — although if it’s disposable income you’re after, New Jersey can only offer you an average of $46,338 per year!

If you’re feeling a little luckier after learning that fortune’s not so random after all, why not check out our expert guides on how to enjoy success with online slots and casino games.

For even more interesting insight and the latest Top U.S. casinos coverage, head on over to our news page.

To determine America’s unluckiest states, we created an index that considered 10 factors, with each factor weighted according to its importance and influence.

Those with a weighted score out of 15:

The combined score for both categories is out of 30.

Those with a weighted score of 10:

The combined score for all five is out of 50.

The combined score for all three is out of 20.

Finally, we combined the weighted scores of each factor for each state to provide a final index score out of 100. The higher the score, the less lucky the state.

Feel free to use this data and research with proper attribution linking to this study. When you do, please give credit and link to TopUSCasinos.com.

Cited by leading media organizations, such as: