The Most Popular Video Games Broken Down by State

Computer games have long been a huge part of U.S. culture, with the latest releases regularly dominating conversation. And the pandemic period opened the market to more people, as many Americans reached for a controller out of bored curiosity only to realize they’d uncovered a new hobby.

But which games have been the most popular in each state over the last year, and which are the country’s favorite franchises of the last decade? 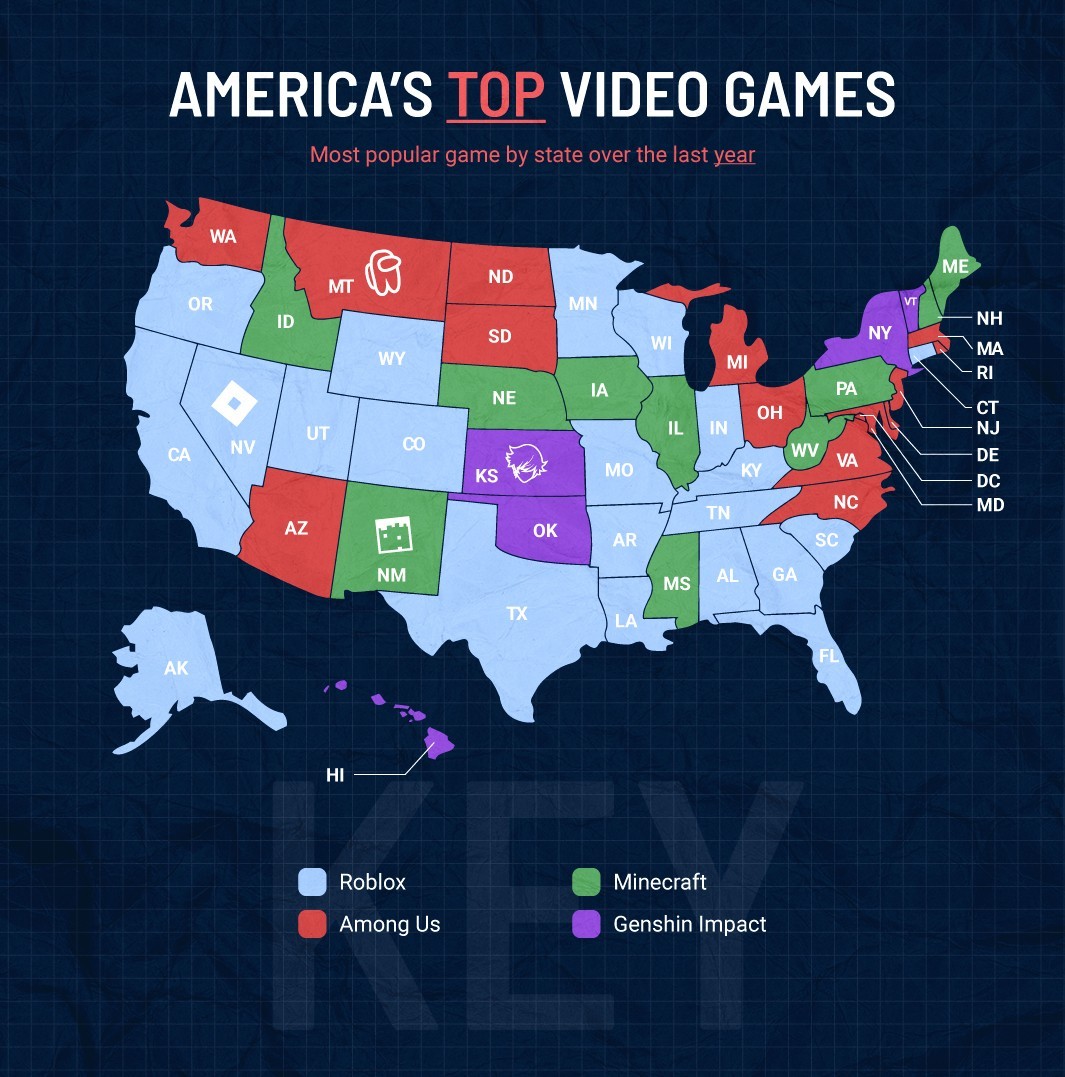 Revealing each state’s game of the year

Over the 12 months between September 2020 and August 2021, the most popular game across America has been the global phenomenon Roblox. In fact, it was the top pick in an incredible 20 states spread across the nation, including Alaska, California, Florida, and Texas. Originally released in 2006, the free-to-play game saw a rapid resurgence during the pandemic, thanks to its interactive features.

CHECK OUT: Top US Casinos

Taking silver as the second most played game over the same period, Among Us was the top pick in 14 states, including Massachusetts, New Jersey, and Michigan — as well as the country’s capital Washington, D.C.

Close behind, despite having a staggering 140+ million monthly users, Minecraft is only America’s third pick, with 11 states registering the iconic virtual world as their favorite game, including West Virginia and Pennsylvania. Meanwhile, Genshin Impact takes fourth, claiming the votes of Hawaii, Kansas, New York, Oklahoma, and Vermont. 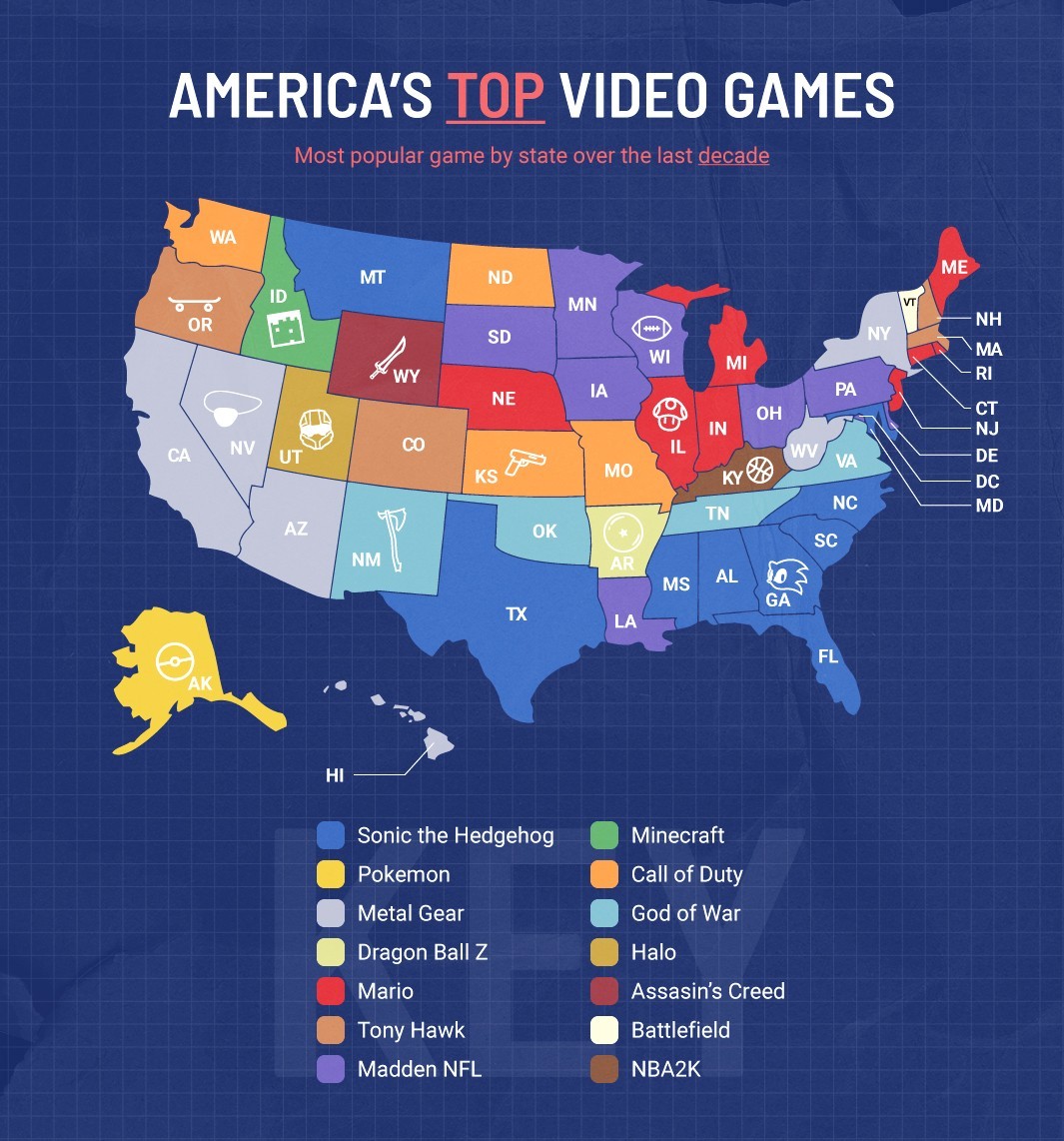 Which are the nation’s favorite franchises of the last decade?

Taking the crown as the most popular game in America over the last 10 years, we have Sonic, with nine state votes overall. The lightning blue hedgehog first hit our consoles in 1991 and has been a reliable favorite ever since. Closely behind, eight states chose football simulator Madden NFL as their franchise of the decade, which also claimed the all-important vote of the capital Washington, D.C.

Ranked the third biggest gaming series, Mario picked up eight votes across the U.S., including Michigan and New Jersey; from Super Mario Galaxy and Super Mario Bros. to the iconic tracks of Mario Kart, the famous Italian plumber certainly has a special place in gaming history.

And finally, rounding off the best of the rest, Assassin’s Creed, Battlefield, Dragon Ball, Halo, Minecraft, NBA 2K, and Pokémon each earned the vote of one state as the top gaming series of the decade.

To discover each state’s favorite game over the last 12 months (September 2020-August 2021), we researched the average monthly Google searches for a selection of the best-selling computer games* during this period. Each state was then individually analyzed, and the top game for every region was recorded. If multiple games shared similar results in a state, we compared performance through Google Trends, to definitively determine which piqued the greatest interest.

We then followed a similar process to uncover the most popular franchises of the last 10 years. In this case, we analyzed the performance of some of the best-selling series** of the decade between August 2011 and August 2021, using Google Trends. This revealed which franchise dominated in each state during the period.

With gaming such a huge part of U.S. culture, it’s interesting to see which franchises make the cut as the country’s favorites, and which dominate each state. For even more expert insight, check out the latest over on our blog.

You can find more information about casino games in our online casino real money guide.