Over the past year and a half, many Americans have found themselves returning to hobbies that have kept them close to home and helped pass the time with family and friends.

Baking sourdough bread, watching TikTok and doing puzzles can only take you so far, though.

Sometimes you need a little friendly competition and don’t want to stare at a screen or break out a complicated board game — and you can find that kind of fun in good, old-fashioned card games.

We surveyed more than 1,000 Americans on their card-playing preferences, both in general and throughout the pandemic. Additionally, with online gambling in the US growing in popularity, we also dove into which casino games Americans prefer and whether they’ve hit it big, 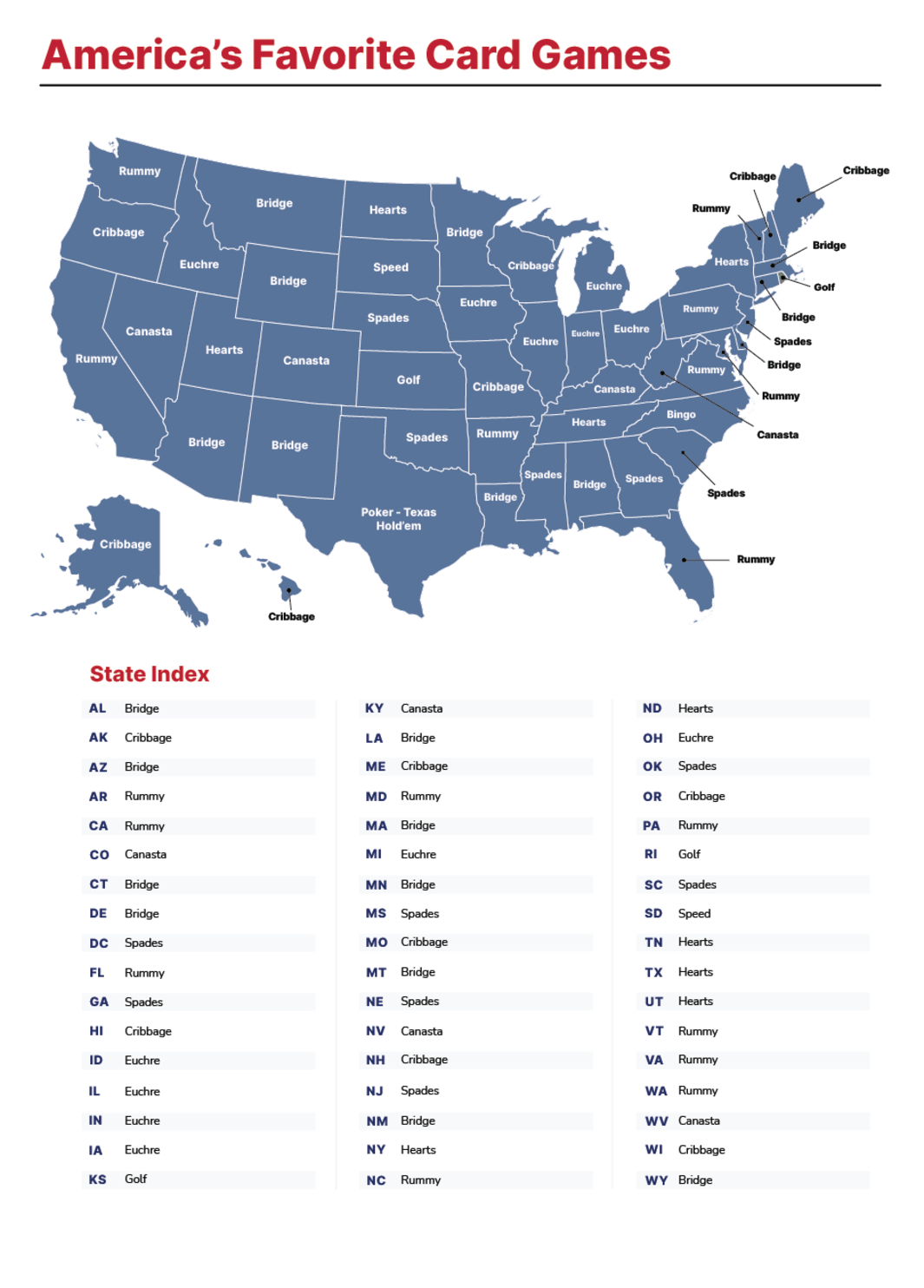 We started by asking respondents to name their favorite card game. Bridge topped the most states with 10, followed by Rummy (nine), Spades & Cribbage (seven each), and Euchre (six). Hearts (five), Canasta (four) and Golf (two) round out the list. 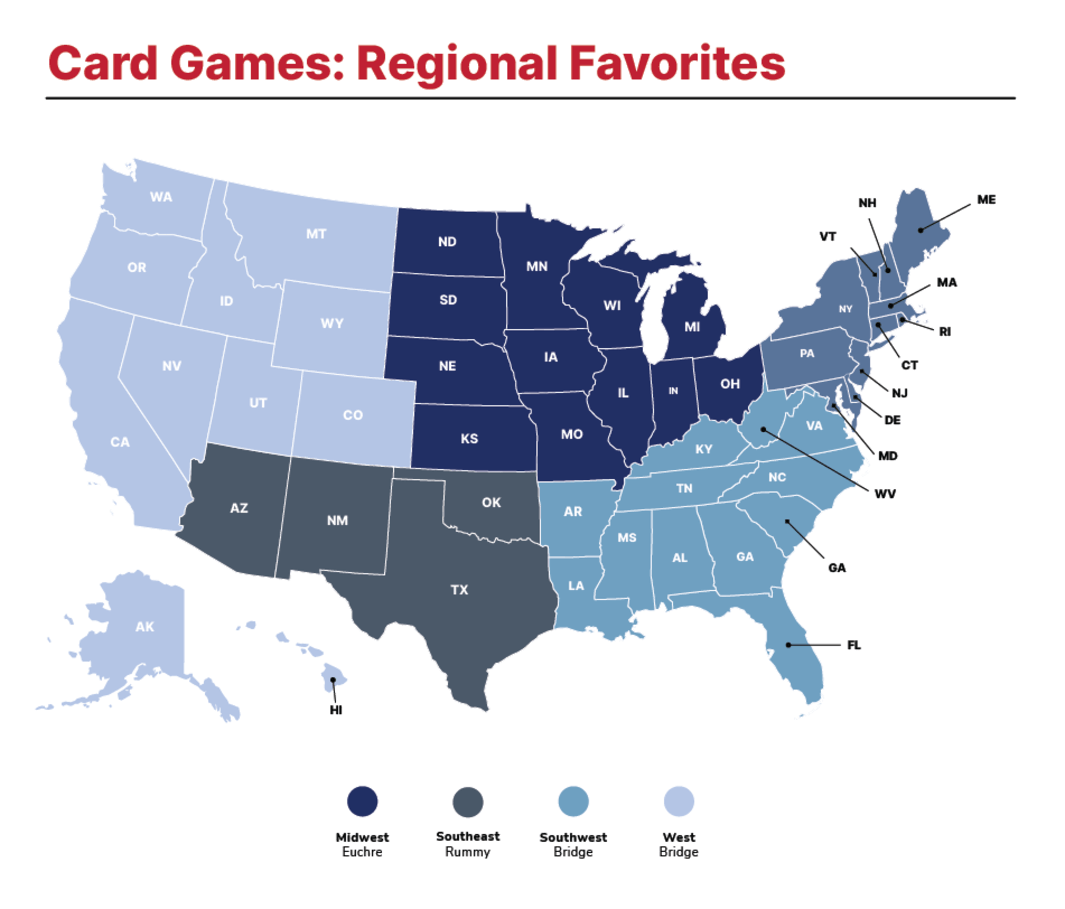 We noticed some regional favorites, so we dove a little deeper and found patterns throughout America’s four main regions by asking respondents which card game they felt best repped their state.

Euchre dominates the Midwest and was hardly mentioned anywhere outside this region (except for the Euchre lovers out in Idaho!). Bridge took the crown in the South (though Spades was a close second) and also is the favorite out West. Southeasterners claimed to prefer Rummy as their regional favorite. 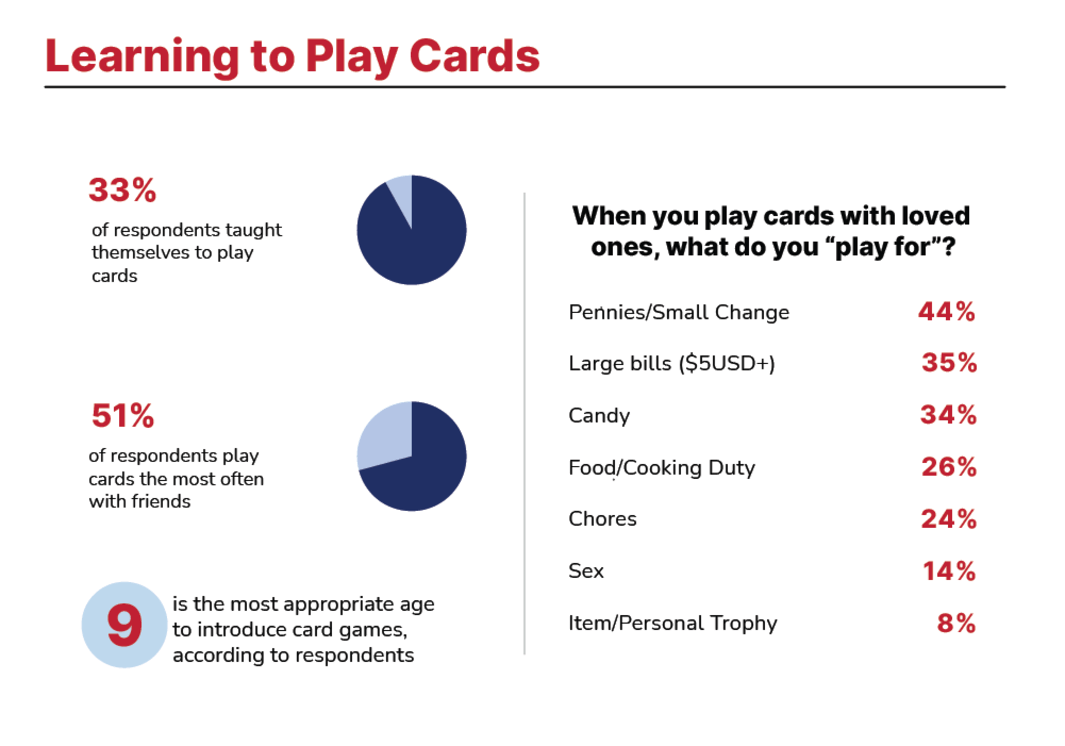 When it comes to where respondents learned to play cards, the majority taught themselves (33%) and learning from friends was the second-most popular choice (27%).

With that stat in mind, it makes sense that over half of respondents play cards most often with their friends. When asked if they “play for” anything, 44% of respondents say they’re only playing for small change. But if you need to spice up your love life or need to split chores with a roommate, 24% of our respondents play for household chores and 14% play for intimacy! 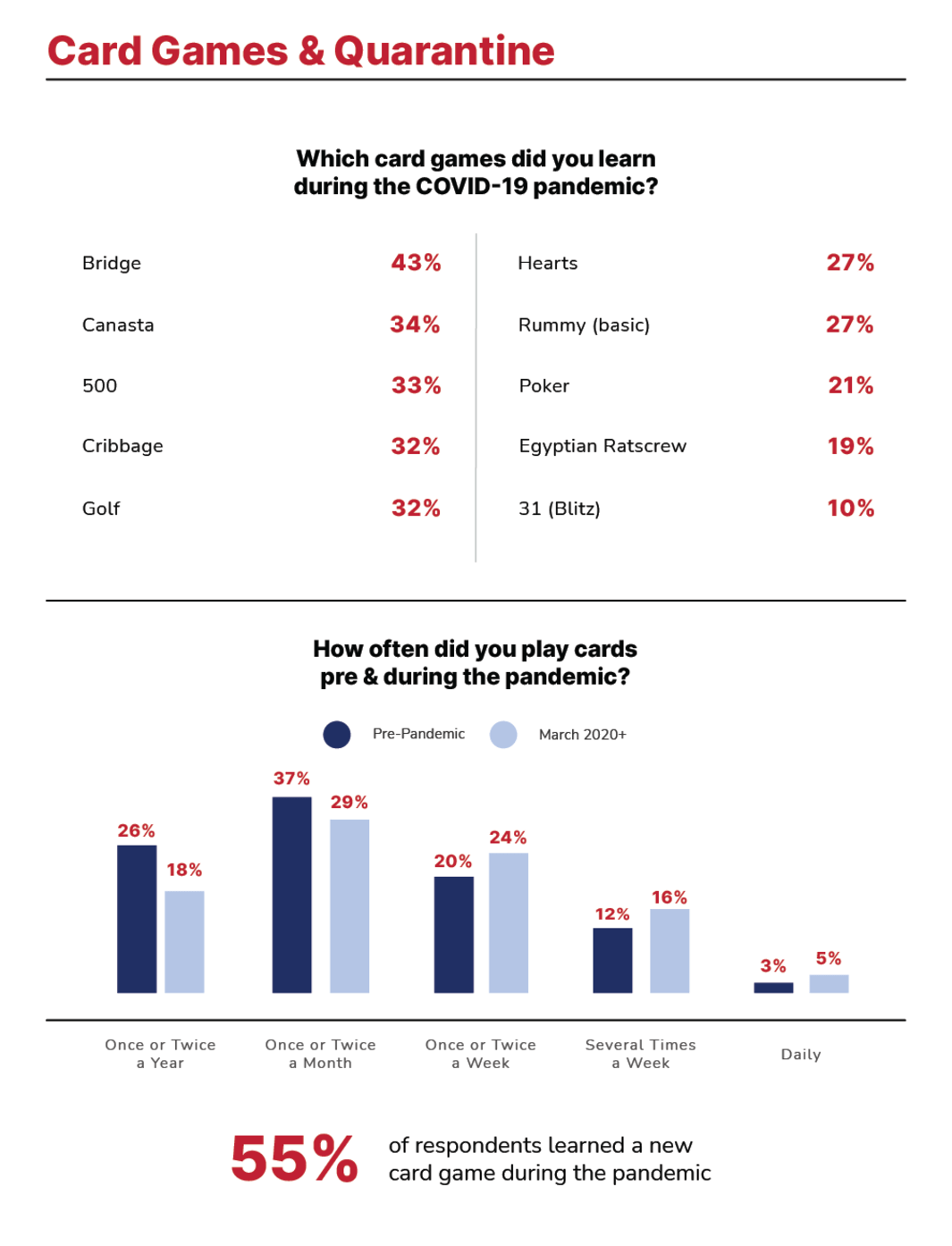 When baking bread and putting together puzzles became too boring, many Americans picked up their playing cards again. Over half of respondents learned a new card game during the pandemic, with 43% taking up Bridge, 34% trying Canasta and 33% learning 500.

Throughout the pandemic, card gameplay certainly increased as respondents’ frequency shifted from once or twice a year or month to once or twice a week (24%) and daily (5%).

If you’re looking for games to play with just one other person, respondents have spoken: 45% say that 31 (Blitz) is the best card game for two players to play! If you have a larger party, 61% say you can’t go wrong with poker. Remember: you can make things more fun by playing for pennies, chores or even something a little spicier! 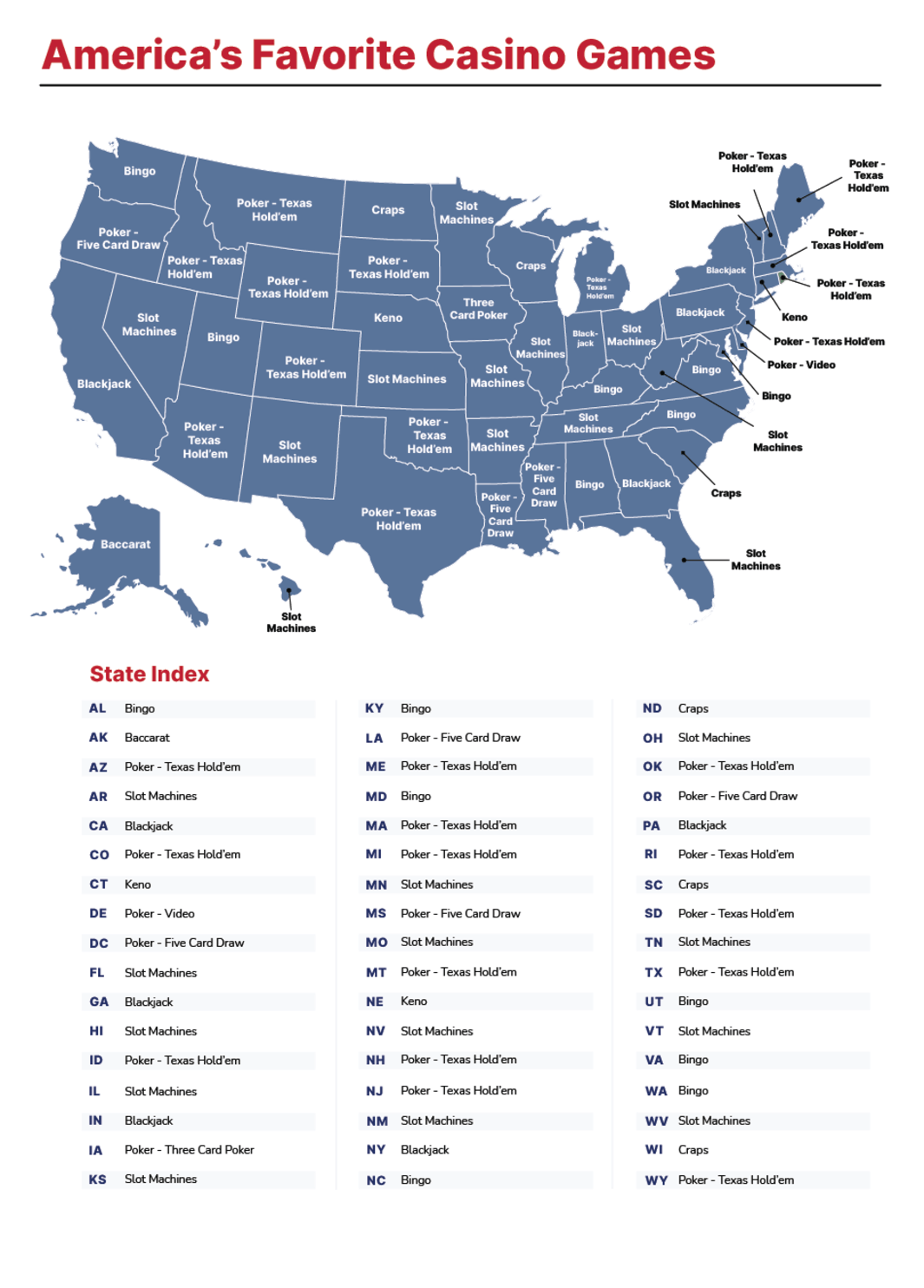 Overall when it comes to casino games, online poker — specifically Texas Hold’em — takes the crown with 14 states listing it as their favorite. In second place are slot machines (13 states), followed by bingo (seven), Five Card Draw (four) and craps (two). Baccarat and Three Card Draw tied for last place with one state each.

There are a few states where gambling is illegal, and the favorites from those states are telling! Hawaii’s state gambling laws only allow for social games, like poker, when played privately. However, the Hawaiian favorite is slot machines, which can’t be played within the state. Maybe Hawaiians are looking for a change to their current legislation!

Utah residents prefer bingo, a game that often leaves people wondering if bingo is considered gambling. The answer to that question is: it depends on the state. Utah has a rep for being the least gambling-friendly state in the country. Live bingo is tolerated in the state, but those who offer it must get creative to avoid trouble with the law. 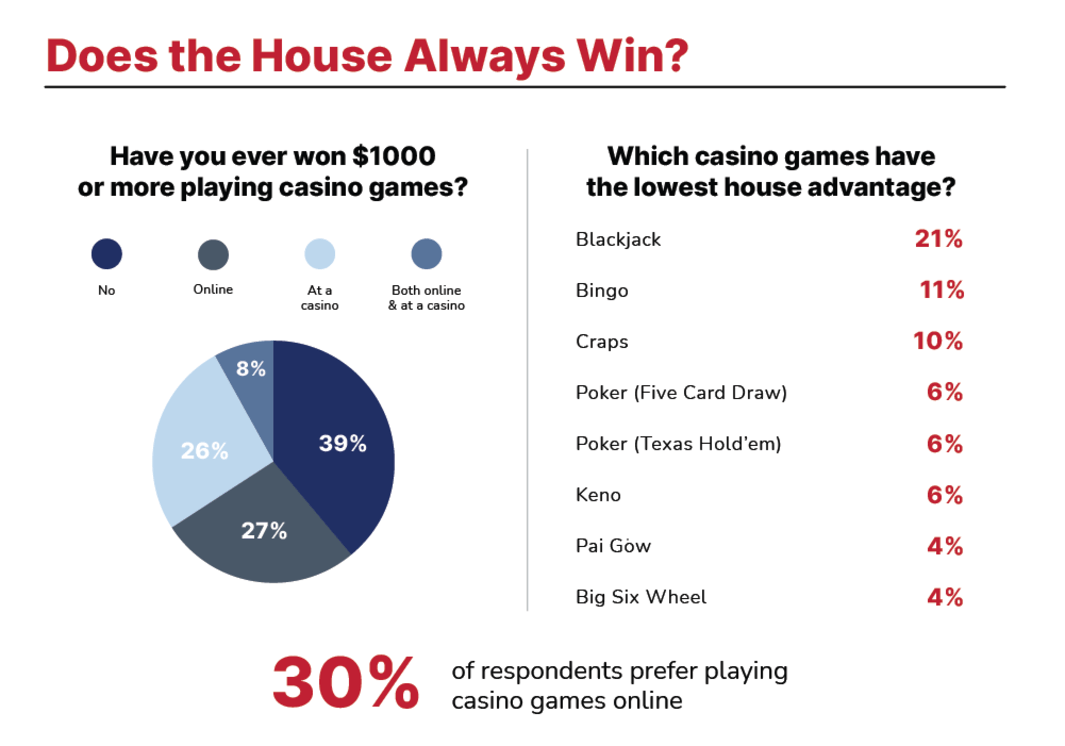 With an increased interest in online gambling in many states and the reopening of many casinos in the U.S., we decided to ask respondents if they’ve made any money and which games have the best advantages for players.

The “House” has a reputation for always winning, so we asked respondents how lucky they’ve been by asking if they’d ever won $1,000 or more while playing casino games — and 61% have!

If you’re wondering if you’ll have better luck at a physical casino or playing at an online casino, it looks like you’ll be safe either way. Twenty-seven percent of respondents have won online, 26% have won in-person. A lucky 8% have even scored at least a rack or more both online and in-person.

When it comes to casino games with the lowest house advantage, Blackjack topped the list fittingly at 21%. Bingo and craps took the second and third place spots at 11% and 10%, respectively.

Whether you’re experienced or new to card and casino games, there’s something fun out there for everyone. If you’re looking for a place to start, try Rummy. Twenty-four percent of respondents feel that Rummy is the most essential card game to learn, and you’ll be a hit in the Southeast.

If a casino game is more up your alley, you can’t go wrong with Blackjack, as 46% of respondents feel that it’s definitely the most essential to learn.

For media inquiries, send an email to mediarequest@gdcgroup.com.

Feel free to use this data and research with proper attribution linking to this study. When you do, please give credit and link to topuscasinos.com.

Nevada Regulators Give OK to Remote Registration for Cashless Gambling